Happy April!  Not sure where you are in the country, but here in New York, Spring may finally have arrived today.  It has been so cold.  It seems the groundhog got his prediction wrong in 2013.  I'm sure Sally Manke, the subject of this SPOTLIGHT and who has "Sally Manke" shop on Etsy, may agree with me on the delayed advent of Spring since she hails from Arcadia, Michigan, which if you don't know, is on the shore of Lake Michigan just southwest of Traverse City.  Not only is Sally a leader of the Etsy "Quiltsy Team", but also a quite accomplished quilter who has had many instances of having her beautiful quilt work showcased by the media.  Her most recent features include a five page article in the winter 2012-2013 issue of "Art Quilting Studio Magazine", which is available at JoAnn's Fabrics and Crafts; the article covers Confetti Quilts and it is mentioned right on the cover!

Hollyhock Cottage
Sally's art quilt wall hanging "Hollyhock Cottage" combines many of her passions in one work of art...bright colors, texture, vintage doors, heirloom flowers and a summer day. This beauty was made with thousands of confetti 'cut & strip' pieces of batik fabric, which were placed freehand on quilt backing and batting.  The fussy-cut flowers and foliage were added before she covered quilt with tulle and she then machine quilted. Is it any surprise this quilt was accepted and displayed at the September Quilt Expo in Wisconsin presented by PBS TV / Nancy Zieman Productions?  It was also included in the special exhibit "Celebrate Spring! 2012", which premiered at the International Quilt Festival in Cincinnati, and was exhibited at the Long Beach, CA and Houston, TX IQA shows: 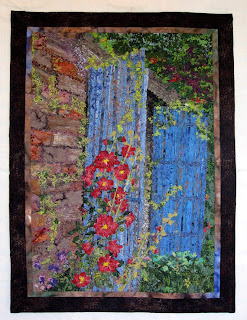 Sally also mentions that she heard it was in a recent issue of "Quiltmania" magazine!  She hasn't seen a copy yet or even know how they got it for the magazine, but it is good to be published!

Background
For Sally, fiber and creativity always have been a part of her life, from the time she created a pattern from newspaper and sewed her first garment on a Singer Featherweight at the age of eight!  Fast forward to an undergraduate degree in home economics and a masters degree in art, which lead to a 25 year career teaching art and life skills (the current idiom for home economics).

Although Sally enjoys crafting traditional quilts, dolls and holiday items, her passion is fiber art.  Her perfect day is one spent in her home studio with fabric spread far and wide creating confetti art, which brings together color and texture with the skill and methods of stitching layers of fabric.  Each confetti quilt has thousands and thousands of tiny bits of batik fabric “painted” on quilt batting and backing.

Several of Sally's fabulous creations which are favorites of mine include jewel-toned quilts, her coiled baskets, mug-rugs, and table runners: 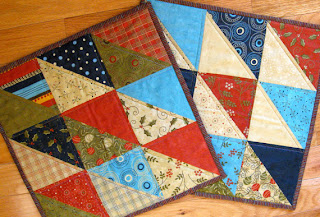 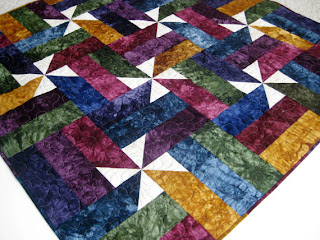 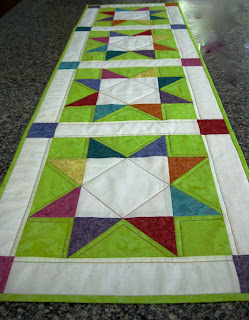 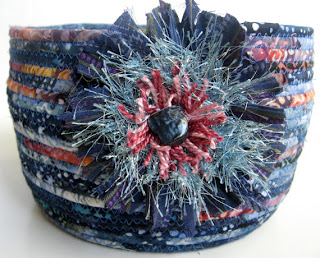 Those Machines that Help Create the Art
Sally has several sewing machines.  For the last five years, she has used the Handi-Quilter mid arm, and she has a love/hate relationship with it.  :-)  Sally also has a Viking Sapphire and a portable Viking, and loves her Featherweight because it's what she first used.

Colors / Inspiration
Sally isn't drawn to favorite colors, but rather all colors of batik fabrics.  And those that are hand-dyed are her favorites to use in her creations.  Confetti quilts use both sides of the fabric.  Sally's inspiration comes another favorite pastime - hiking trails and beaches in Michigan or while on family vacations to other destinations.  Sally and her husband are avid travelers; She finds inspiration in old buildings, nature, flowers and "old stuff".  Sally's high energy level makes her quite productive, but she feels there is never enough time to create all the ideas bouncing around her my head!

On the Nightstand....
When not in front of a sewing machines or creative in her studio, Sally is an intense reader!  She listens to books on tape while driving, audio books while sewing, she reads on her iPad at night.  Sally may have several books going at once.  Sally enjoys mystery or suspense with an occasional romance thrown in, and she just finished Jodi Picoult's "Wolf Man".

Great to learn more about Sally's many talents and interests!

thebutterflyquilter said...
This comment has been removed by the author.
April 8, 2013 at 7:45 PM

Sally is a wonderful fiber artists. Love her work!

It was nice to learn more about Sally as I wrote this entry. :-)

I love Sally's work. Thanks for sharing more about her life. Well done!

Looking for a Quilter to help FINISH your quilt?

Widgets for Etsy Sellers
Powered By

The Quiltsy team is accepting applications for new members! If you would like to apply see our application page .